On Tues., June 14, families, friends and supporters of the fifteen people who've been fatally shot by Albuquerque Police Department officers, gathered in a rally to call attention to the inaction of Police Chief Ray Schultz and Mayor Berry. The rally was held from 4:00p.m. to 6:00p.m. in the Albuquerque Civic Plaza. Family members of the victims also spoke out against the inaccurate reports generated by the popular media outlets and the callous treatment of victims families by APD.

"APD will never know what they took from my family," said Eric Gomez, the brother of Alan Gomez who was shot by an APD officer while holding a spoon. Alan Gomez also suffered from mental illness. Gomez went on to detail the reaction of the officers after his brother was shot.

"The officers locked me and my girlfriend in the back of a police car for four hours. They laughed and told jokes, portraying my brother as a criminal while having their donuts and coffee. This is something that the media didn't mention," said Gomez.

A report generated by local news station KOAT states that Alan Gomez was convicted on aggravated battery of a household member charges and arrested for driving while intoxicated. Online court records state that the both aggravated battery and DWI were dismissed and charges were dropped.

Andreas Valdez, a spokesperson for Vecinos Unidos, warned rally attendees about the complacency of their elected officials.

"Beware of your mayor, police chief and city council members because they are part of the problem," he exclaimed.

Valdez also called for the resignation of Police Chief Ray Schultz and criticized the District Attorney's office for not addressing the issue of police brutality.

"There needs to be an independent prosecutor to prosecute (these police brutality cases)," said Valdez.

Fred Casaus, the father of Jerry Perea, 38, who was stunned to death with a Tazer by an APD officer also criticized the misinformation reported by the media. A report generated by KOAT quoted Police Chief Schultz saying that Perea was "very large and overweight". Schultz also insinuated that Perea may have had a heart attack or health problems due to his size which may have contributed to his death after being stunned. Casaus stated that his son was approximately five feet ten inches tall and medium build.

"They (APD officers involved) said that my son was trying to injure them with a large crucifix," he said while pulling out a six inch, wooden crucifix from his breast pocket.

"I realize that a policeman's job is dangerous. I wouldn't want it. But if they had any conscious at all they would realize what they do to families (when they kill someone)," he sighed.

In a separate interview, after the rally Casaus was asked if any reporter in any of the news outlets that reported his son's shooting had seen the cross. "No" he said silently.

The rally was initiated by Albuquerque Families and Friends Against Police Abuse, ANSWER NM (Act Now to Stop War and End Racism), and Vecinos Unidos. For more information on future rallies call: 505-268-2488. 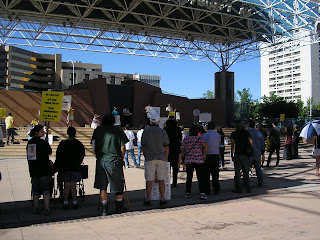 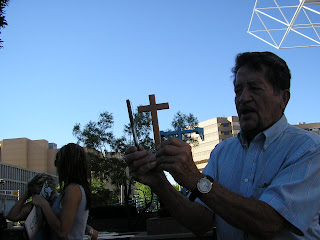 Email ThisBlogThis!Share to TwitterShare to FacebookShare to Pinterest
Labels: Fred Casaus father of tazer victim, holding the crucifix that his son allegedly attacked police with, Jerry Perea, Protesters at rally